HomeEsportsMore than 100,000 Call of Duty players banned for cheating as Activision cracks down on hacks | Daily Mail Online 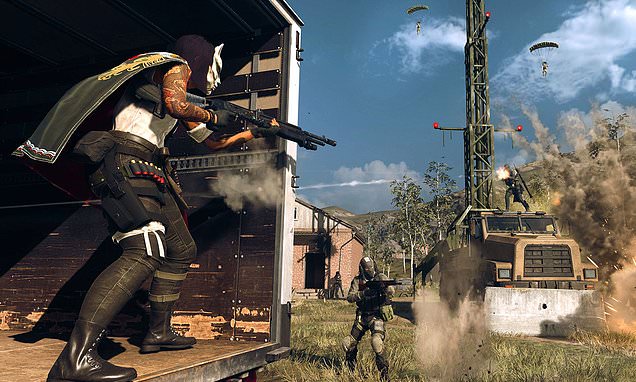 More than 100,000 Call of Duty players banned for cheating as Activision cracks down on hacks | Daily Mail Online

Another 100,000 Call of Duty players have been banned for cheating, game publisher Activision said, adding that it was focusing on repeat offenders and ‘cheat providers.’ Call of Duty: Warzone, a battle royale style game, has been plagued by hacks and cheats since it launched in March 2020.The most common cheat is an aimbot, a software add-on that allows players to shoot enemies without having to aim their weapon.Activision has promised a new PC anti-cheat program, presumably in time for Call of Duty: Vanguard in November.Activision initially disabled 70,000 accounts in April 2020, but the bans have ramped up this year as Raven Software took over as development studio for the CoD series from Infinity Ward.’A warning to cheaters: our new PC anti-cheat is coming and we’re dedicated to rooting out active and repeat offenders today,’ the official Call of Duty Twitter account tweeted on Wednesday .’Over 100,000 Call of Duty accounts were banned yesterday, targeting repeat offenders and cheat providers at the source.’ Scroll down for video In a In May 2021, Activision said more than 500,000 accounts had been banned across multiple Call of Duty titles—some for cheating but many more, some 350,000 of them, for ‘racist names or toxic behavior.’ ‘We are committed to delivering a fun gameplay experience for all of our players,’ the company said in a blog post .’There’s no place for toxic behavior, hate speech or harassment of any kind in our games or our society.We are focused on making positive steps forward, and together celebrating the best fans in the world.’ Approximately 50,000 accounts were banned on August 11 alone for cheating and other infractions, Dot Esports reported .

Vanguard, the 18th installment in the long-running Call of Duty series, will be released worldwide on November 5.Focusing on the birth of a special forces team at the end of World War II, it will be available for PlayStation 4 and PlayStation 5, Xbox, and PC.According to Call of Duty expert Tom Henderson, Vanguard will have a new anti-cheat system that’s been in development for over a year, Gamespot reported .A warning to cheaters: our new PC anti-cheat is coming and we’re dedicated to rooting out active and repeat offenders today.

Over 100,000 #CallOfDuty accounts were banned yesterday, targeting repeat offenders and cheat providers at the source.pic.twitter.com/GVLD1sPeEn The free-to-play Warzone, which has surpassed 100 million active players, is expected to get a major update shortly after Vanguard debuts.Earlier this month, Raven Software tweeted that it was listening to Warzone players complaining of cheaters and was ‘hard at work behind the scenes’ on a solution.

Cheating may not be Call of Duty’s only problem: In January, a survey of more than 1,000 adults in the UK found that couples frequently argued over how much one partner was playing the popular first-person shooter.Arguments over gaming erupted weekly among one in four couples, with Call of Duty the most common source of strife: 38 percent of couples said they’ve argued over Activision’s war game.

Video games and interactive media generated $139 billion in the US in 2020, according to market research firm SuperData , a 12 percent spike from the year before driven by pandemic lockdowns.A separate report from Verizon determined that, during the first weeks of the nationwide COVID shutdown, the amount of internet usage dedicated to playing video games soared by 75 percent ..