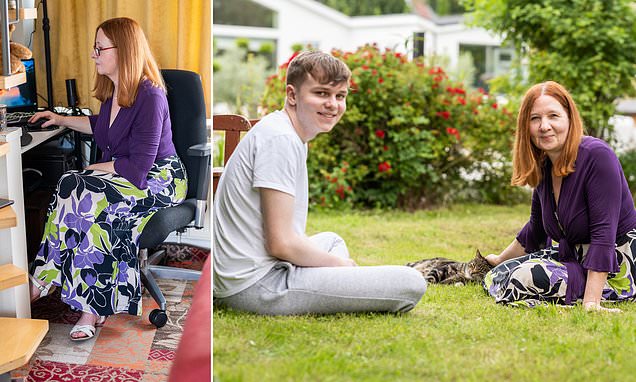 A month away from her 59th birthday, you’d expect Anne Fish to be looking forward to retirement and spending more time pottering around her scenic garden overlooking the river Thames.Instead, she is locked into her computer screen for up to 13 hours a day playing Fortnite, the online video game that has hooked more than 350 million players worldwide – most of them teenagers – and amassed billions of dollars for its creators.At the height of her gaming, she played for 18 hours straight, only taking short breaks to make cups of tea and use the bathroom.But then, as the mother of one of the world’s best Fortnite players, it’s perhaps little wonder that she became engrossed in the game herself.Now Mrs Fish is looking forward to being rewarded for her efforts with a slice of the pie after being signed up by the Dubai-based esports firm Galaxy Racer.

She is under paid contract to produce content around the game, which will include livestreaming videos of herself playing and teaching baffled parents about the battlefield that has their children on tenterhooks.Anne Fish turned pro after her son Benjy left school at 15 to focus on Fortnite – a PC game which has earned him more than £500,000 Mrs Fish with a controller in her hands as she sits at her battlestation Benjy gives his mother a few pointers at the PC screen She should know better than most: as the manager of 17-year-old Benjy Fish, a professional gamer, she saw him progress so quickly that she took him out of school at 15 to allow him to focus on the game.She only took up the game herself in February this year, playing in the family living room while Benjy played in his bedroom, and admitted she was ‘really bad’ – but swiftly realised there was a market for streamers wanting to watch average players in action.

Mother-of-two Mrs Fish, who lives in Sunbury-on-Thames, Surrey, said: ‘I used to play a game called Banjo-Kazooie on the Nintendo 64 with the children when they were very young but I had not played games in years.’My computer had such dated graphics that it could not even run Fortnite.’I was already involved with that world because of Benjy but I did not understand too much about it.’Everything happens so fast in Fortnite that you don’t always know what’s going on when you’re watching someone else playing but when you’re playing yourself, you understand more about the end game and strategies.At the height of her gaming, Mrs Fish played for 18 hours straight, only taking short breaks to make cups of tea and use the bathroom ‘Since I’ve been doing it, I have had lots of feedback from other parents who are starting to have a go at playing it.’I have quite a competitive side and enjoy the challenge of learning a new skill.It’s good fun.’The building element of the game is pretty cool, although I can’t do it and usually just hide or rotate to dead side, which means going to a part of the map where there are not many players.’ Fortnite involves 100 players being dropped onto an island, where they have to build defence forts, find weapons and kill one another until there is only one player standing.

Benjy, who began playing at 13 and was signed up at 15 by esports company NRG, has made more than £500,000 from gaming professionally after qualifying for international tournaments, including the Fortnite World Cup in 2019.While his mother is a long way from matching his earning power, their fortunes are a marked contrast to Benjy’s early years, when he and his family were made homeless after his father David died of esophageal cancer at the age of 57.Benjy was just eight months old at the time.Mrs Fish, widowed at the age of 42, could not afford their rent and had to rely on handouts from her parents.

While she is still living in a rented home – Benjy is still too young for a mortgage and most of their earnings are tied up in the family business – Mrs Fish said Benjy’s father would have been ‘exceptionally proud’ of what they had achieved.

She said: ‘I have always been focused on work and bringing up the children.It has been really nice to do something completely different.I have had the most fun I’ve ever had.’ Mrs Fish bought a secondhand laptop for her son Charles, now 24 and a jazz guitarist, when he was eight years old.While Charles only dabbled in online gaming and soon lost interest, Benjy became hooked from the age of eight, playing games such as League of Legends and Rocket League.While his mother is a long way from matching his earning power, their fortunes are a marked contrast to Benjy’s early years, when he and his family were made homeless after his father David died of esophageal cancer at the age of 57.Benjy was just eight months old at the time.Mrs Fish, widowed at the age of 42, could not afford their rent and had to rely on handouts from her parents In real life, he was a keen bowler and competed in his first tournament at three years old.

But when he was diagnosed with the joint swelling condition Osgood-Schlatter disease when he was 11, he gave up physical sports and spent increasing amounts of time playing online.Mrs Fish only realised how good he was when he competed in a tournament in February 2019 with his Norwegian gaming partner Martin Foss Andersen, known as Mr Savage, and they won £7,200 each.At the same time, Fortnite creator Epic Games lowered the age limit for competitors from 16 to 13 and Benjy qualified for the game’s first World Cup.Mrs Fish approached his headmaster at Reed’s School in Cobham, Surrey, to ask for leniency with his timetable as Benjy was often playing into the early hours.When he was refused time off, she took him out of school.She said: ‘He needs 10 to 12 hours’ practice a day when he is competing and six to eight hours a day when he is not.’Bring signed as a professional esports player is the equivalent of being signed as a professional footballer for a Premier League side.

You have got to put in the hours.’I took him out to home-school him when he was 15.It was a hard decision to make but I have always been a big believer in giving your child the opportunity and encouraging them if they are passionate about something.’ While Benjy has yet to take any GCSEs and stopped being tutored when he was 16, she said he could sit exams later in life: ‘I did not go to university and went back to college in my 50s.So did my father.’ Fortnite, among other online games, has come in for criticism from behavioural experts, who say it can induce rage and mood swings in teenagers and is designed to be addictive.There are also concerns about the levels of violence involved in taking part, although it is not as gory as games such as Call of Duty.

Mrs Fish is adamant hers and Benjy’s habit is a healthy one.She said: ‘Gaming is largely misunderstood.’When your children are gaming, they are learning other skills such as leadership, communication and team-building.Those skills can be transferred into other careers.’ As part of Cope – the Coalition of Parents in Esports – she hopes to dispel some of the stigma surrounding competitive gaming and teach parents about its benefits.Anne Fish signed a contract of her own, producing content based on the game which Benjy already plays at the top level She has her work cut out, however; according to Verto Analytics, only 0.1 per cent of Fortnite players are over 55.’Parents should look at the wider picture,’ she said.’There are now degrees in esports and career opportunities in the management and administration side of things.’Hopefully myself and other parents can help dispel the myths out there.’ She fell into gaming by accident.

Benjy was taking online chess lessons with Norwegian grandmaster Jon Ludwig Hammer, who was also livestreaming his Fortnite playing on Twitch, a platform popular with gamers.Mrs Fish said: ‘Seeing Hammer stream and not be brilliant at it made me think I could stream too.’There was also an audience because I was Benjy’s mum and trying to learn to play.’ She began livestreaming on Twitch as mamabenjyfishy – Benjy plays as benjyfishy – and quickly attracted followers.She now has 166,000 subscribers on Youtube and 430,000 on Twitch.Former bookkeeper Mrs Fish said she had gone from being a mentor and advising young gamers on their tax dilemmas to being a friend.’The gaming community has been really supportive,’ she said.’They don’t see me as a mum, they see me as a friend, and we have online Monopoly evenings and karaoke nights as well as competing.’ She is hoping to get to a professional level but said it could take two years: ‘I am old and not as good.Their skill level is different at their age.’ Mrs Fish is also working on two books she plans to publish herself – one surrounding Benjy’s rising fame and a second book on gaming from a parent’s perspective.

She said: ‘I stream for five or six hours most days and up to 12 hours on tournament days.’I’m having an amazing time and play more than Benjy now.’.