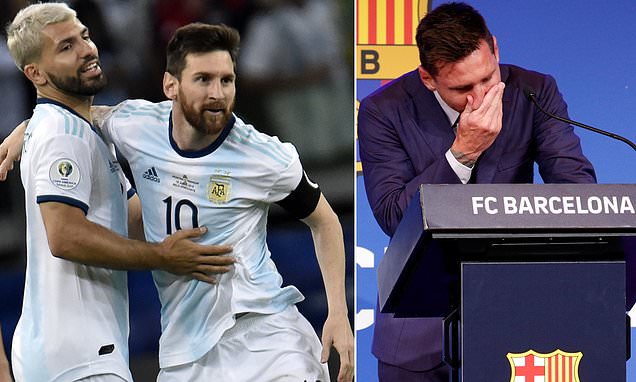 Lionel Messi ‘s exit from Barcelona left the forward ‘very sick’, according to close friend Sergio Aguero – as he revealed the ‘moment of shock’ when the legendary star’s departure was confirmed.Messi ended his 20-year spell with the Catalan outfit this summer with the cash-strapped side unable to afford his eye-watering £600,000 a week salary, and the Argentine was reduced to tears at his farewell press conference as he was forced to leave his beloved club.The 34-year-old went on to seal a sensational free transfer to PSG to join former Barcelona team-mate Neymar and compatriots Angel Di Maria and Leondro Paredes, but the player found it difficult to deal with the immediate aftermath of his exit, according to former Man City striker and fellow Argentine Aguero.Sergio Aguero has revealed Lionel Messi was ‘very sick’ after his Barcelona exit was confirmed The ex-City star consoled Messi on a visit to his house after the news and tried to distract him ‘It was a moment of shock,’ he told El Pais .’He was very sick.

When I found out I couldn’t believe it.’That Saturday I went to see him at his house.And, because of my personality, since I didn’t see him well, I tried make him forget what had happened.

‘I could see that he was half off and I was trying to distract him.I was telling him about my Esports team.And the things we were doing.’ Messi went on to seal a sensational free transfer to PSG with Barca unable to pay his salary Aguero – a friend of Messi’s and an Argentina team-mate – said his exit was ‘a moment of shock’ Aguero has been a team-mate of Messi’s on the international stage for years, but the pair were very briefly together at club level as he signed for Barca on a free transfer this summer having left the Etihad.He had been on the blue side of Manchester for a decade and was looking forward to linking up with Messi before the club shortly announced the players would be ending his long and iconic spell.

Aguero is yet to feature for Barcelona since his switch as he continues rehabilitation from a calf issue, but scored during a training match this week as he steps up his fitness levels to prove his worth to boss Ronald Koeman.Messi himself hasn’t enjoyed the best of luck either after arriving in Paris, scoring once so far and struggling to gel with his new team-mates – with the forward unable to produce the high standards expected of him thus far.Aguero had been hoping to play alongside him at club level after joining Barca this summer He notched his first strike for the club in the 2-0 Champions League win over Manchester City but is yet to score in Ligue 1.

Many fans had drooled over the prospect of him playing with Neymar and Kylian Mbappe, but the trio started together in the 2-0 loss to Rennes and failed to register a shot on target.Messi insists he is happy in the French capital as he continues to adapt, but could not hide his heartbreak at having to leave Barca in his farewell press conference, with the tearful star insisting he wanted to stay and did everything possible to make that happen.’This is really difficult for me after so many years, being here my entire life, I’m not ready for this and honestly last year with all the nonsense, I was convinced I knew what I wanted to say but this year is not the same,’ he said.

It has not been the dream start to life at PSG that many would have been expecting from Messi ‘My family and I were convinced I wanted to stay here, that’s what we all wanted more than anything.We thought we’d be staying here in Barcelona, today I have to say goodbye to all of this.’We’ve always made this our home, we’re at home and we thought we’d be staying here in Barcelona.’ ‘My contract was never the issue … what I know is that I did everything I could.The club say it could not happen because of La Liga.I can guarantee you that I did everything I could to stay.’.