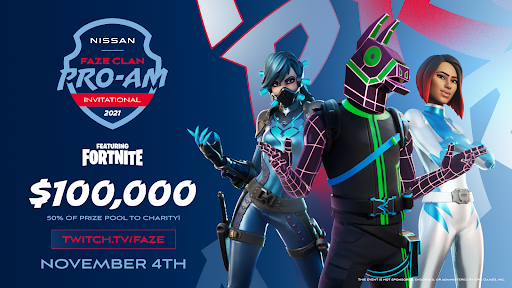 The Nissan FaZe Clan Pro-Am Invitational will see FaZe Clan members, Fortnite streamers and Manchester City FC players compete for a piece of its $100,000 (£72,700) prize pool.Half of the prize pool will be donated to a non-profit the winners choose.

RELATED: FaZe Clan goes public, to be listed on NASDAQ

Fortnite streamers from the FaZe Clan’s roster, including Nate Hill and Bizzle, will compete in the event.Moreover, Manchester City streamers Threats, Benjyfishy and football players for Manchester City will also participate.

The tournament will feature eight Fortnite trios, each of which will be made out of celebrities and footballers, as well as professional players and streamers.Throughout the broadcast, FaZe Clan will host giveaways for viewers to win prizes such as merchandise or cash vouchers on the organisation’s website .

FaZe streamer Nate Hill said: “I’m stoked to be working alongside Nissan again for the Nissan FaZe Clan Pro-Am Invitational.Being able to play Fortnite with some of the best Fortnite streamers and Manchester City players for a good cause is really special.”

This is not the first time FaZe and Nissan are cooperating on an esports event.Earlier this year, the two brands hosted the ‘Elite Series Cup’, which featured top Fortnite players of the season.

FaZe and Nissan also cooperated on activations for the Call of Duty League.

Esports Insider says: Gaming for a good cause is always nice to see.Following the success of the Elite Series Cup, FaZe and Nissan have found a common language when it comes to partnerships.

If the event goes down well, even more activations and partnerships between the two parties are likely to occur in the future..