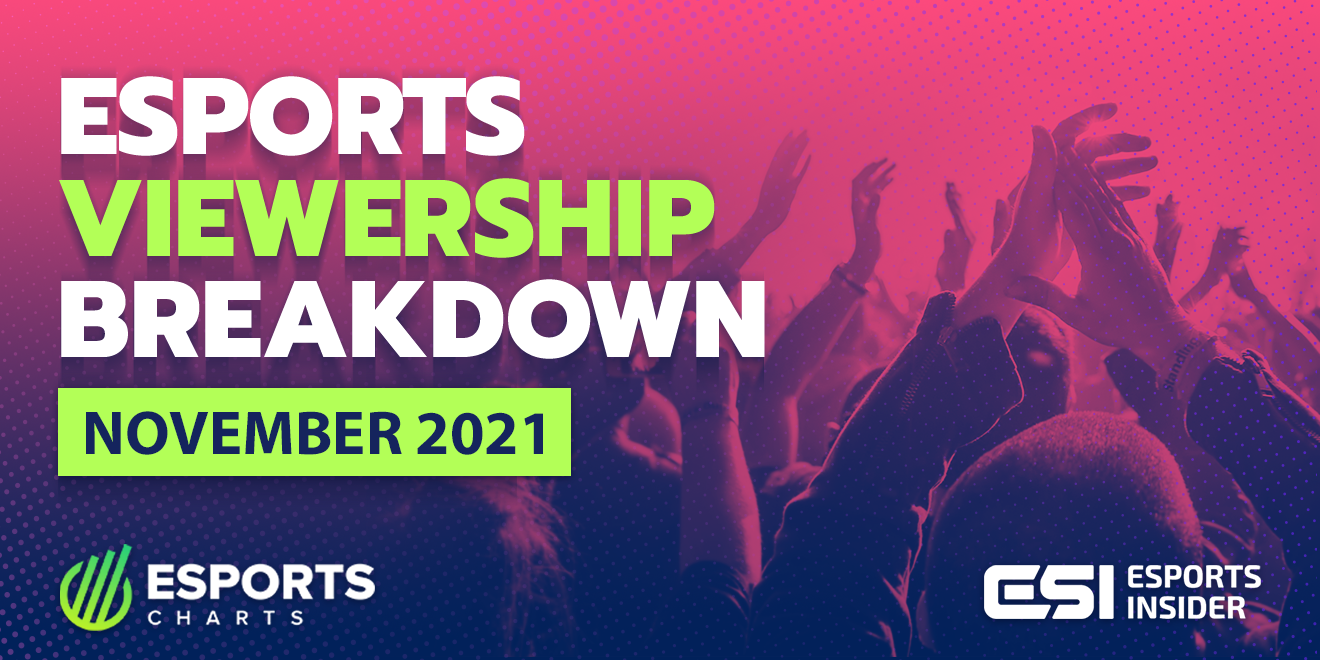 November 2021 saw the conclusion of many titles’ esports ecosystems.In particular, the likes of League of Legends, CS:GO and Free Fire all showcased large scale events to end the year with a bang.

Whilst it is well documented that League of Legends’ World Championship went down as a viewership success, how did the other competitions in November compare? Moreover, how are December’s esports events performing?

To no surprise, the 2021 League of Legends World Championship was the most-popular esports event in November.Recording a peak viewership of over 4m, the tournament has the second highest peak viewership of 2021 (excluding Chinese viewers).

According to Esports Charts , this year’s World Championship recorded the highest peak viewership, average viewership and most hours watched of any League of Legends global event.In addition, World 2021 was only the seventh esports tournament in history to have an average viewership of over 1m spectators.

League of Legends’ viewership success — alongside VALORANT Champions 2021 recording a peak audience of over 1m — signifies what has been a strong year for Riot Games in terms of garnering viewers.

Firstly, PGL’s first major in over two years broke the record for the highest peak viewership for a CS:GO event ever by recording 2.74m viewers.The previous record of 1.33m from ELEAGUE Major 2017 was actually amassed during four separate matches throughout the event.

PGL also recorded a Russian audience of over 1m peak viewers.This is even more impressive when taking into account that only six CS:GO tournaments have ever recorded a total peak viewership of 1m or higher.

Whilst PGL took a lot of the attention, BLAST Premier’s figures should also not go unnoticed.According to Esports Charts, the tournament recorded a peak viewership of 861,383 and generated 17m hours watched, which is the highest total for any BLAST CS:GO event.

The shooter concluded its competitive season earlier this month with IEM Season XVI Winter garnering a peak viewership of 308,457, which was recorded during the quarterfinal matchup Gambit vs Vitality.

Finishing third and fourth on Esports Charts’ November viewership table was Mobile Legends: Bang Band and Free Fire — with the former gearing up for its conclusion in December.

The invitational event saw a huge increase in viewership compared to its same edition last year.This includes more than doubling the event’s average viewership (142,038 compared to 341,464) and increasing its peak viewership by over 1m.

Following Garana’s decision to cancel its second 2021 Free Fire World Series event in August, the mobile title opted to host regional tournaments.One of which was the Free Fire Asia Championship 2021, which garnered a peak viewership of 1.08m.

According to Esports Charts, the India Championship recorded a Peak Hindi Viewership of around 984,000.This is 80 percent more than the Asia Championship.

Despite the fact that the year is coming to a close, many esports tournaments have still taken place this month.Moreover, the teams in Mobile Legends and Arena of Valor are currently competing in the title’s respective World Championships.

As of this writing, the M3 World Championship currently has a peak viewership of over 2.6m.This means the title still has a long way to go if it wishes to beat its previous record of 3m — which was garnered at the M2 Championship in January.

Nevertheless, given that finals usually attract the highest viewership figures, the mobile title could certainly reach its record again.

Once all of this year’s tournaments have concluded, keep an eye out for Esports Insider’s feature on the top 10 most popular esports events of 2021.